There are 50,847,534 prime numbers between 2 and 1,000,000,000. For reasons unknown, I wanted to know whether a C++ implementation can find all these numbers on my desktop computer (Intel Core i7 860, quad-core, hyperthreading, 2.8GHz) in less than 1 second with a simple algorithm such as the Sieve of Eratosthenes.

By only slightly modifying the basic algorithm and unleashing the raw power of OpenMP, I achieved a 20x speed-up.

UPDATE July 7, 2014: Many browsers support asm.js to boost Javascript performance. Scroll down to find my asm.js implementation or click here. Note: Much more complex algorithms easily outperform my code. My primary focus was parallelism in general, not prime numbers !

I ported the short Odd Numbers Only algorithm to Javascript and PHP; the code can be seen at the bottom of this page. The table below shows the expected number of primes for some reference inputs and the performance numbers measured on my computer.

In this benchmark, C++ is approx. 4x faster than the best Javascript engine (Mozilla Firefox) and approx. 100x faster than PHP 5.3. Only the PHP times marked with (*) are measured on my local computer while all other PHP timings were measured on the create.stephan-brumme.com server (which is about 25% bit slower).

All browsers are still 32 bit programs - while my operating system is already 64 bit - and run out of memory when attempting to find all prime numbers from 1 to 1 billion. The more complex blockwise sieve does not suffer from this problem but I was too lazy to port it, too.
Multithreading is currently not supported by neither Javascript nor PHP. For your interest: the browser ranking is contrary to what I have observed with my Javascript global illumination port of smallpt. I expected PHP to be faster, too.

UPDATE February 14, 2013: More than a year after my initial tests, Firefox became the fastest browser due to its vastly improved Javascript engine.
(read more ...)

Whenever I have to do some performance testing, I try the most simple way: write a short program and run it within my Linux bash shell which comes with a built-in time command:
$ time ./testcode real 0m0.788s user 0m0.696s sys 0m0.080s
Obviously there can (and will) be some overhead by the operating system. So numbers are typically a bit off.
The timing resolution isn't that great, either, and often lies above 10ms.

That's why I wrote a simple C routine to measure performance inside the code. My goal was to have numbers that are accurate down to about 1 microsecond (10-6).
I didn't opt for extremely high timing precision (count CPU ticks) because I rarely need that degree of precision and really want to avoid the tricky details of CPU frequency scaling, cache stalls etc.

Another feature is portability; simply recompile the code and run it on Windows and Linux. The code works fine with GCC as well as Visual C++.

All my timing code contains is a single function seconds() returning a double. You can invoke it in your programs like this:

Let's start with the core features of my C++ hashing library:

Since there are no external dependencies, not even dependencies within the library itself, all you need is to include the header of the hashing algorithm of your choice and add the identically named .cpp to your project. That means if you want to add SHA256 hashing to your C++ program, you only have to include sha256.h and sha256.cpp in your project.

If you prefer SHA256, then your code will look like this:

Yes, there is std::sort. Yes, it's pretty much the most efficient way to sort generic STL containers. No, it's not perfect.

What if the data is already almost sorted ? std::sort doesn't benefit a lot from processing already sorted data. However, it's quite common to have (partially) sorted data.

std::sort requires RandomAccessIterator which are sometimes not available for custom containers.

What about std::list ? The syntax is completely different:

hide std::list<int> mylist; // ... fill mylist with data ... // compiler error: std::sort(mylist.begin(), mylist.end()); // must use this instead: mylist.sort();
That's why I wrote some sorting routines on my own to overcome all those limitations:

(and all other STL containers)

The sorting algorithms are ordered more or less by overall performance (slowest first). As you can see faster algorithms have stricter requirements: The algorithms are nothing new, they can be found in every decent book on algorithms and, of course, online (e.g. Wikipedia).

Recently I had to do a lot with file loading and parsing. It can be especially tricky to come up with a fast solution if you have to jump around within these files. Seeking and proper buffering were my biggest problems.

Memory mapping is one of the nicest features of modern operating systems: after opening a file in memory-mapped mode you can treat the file as a large chunk of memory and use plain pointers. The operating system takes care of loading the data on demand (!) into memory - utilizing caches, of course. When using my C++ class MemoryMapped it's really easy:

hide How to use // open file MemoryMapped data("myfile.txt"); // read byte at file offset 2345 unsigned char a = data[2345]; // or if you prefer pointers const short* raw = (const short*) data.getData(); short b = raw[300];
Windows is completely different from Linux when it comes to opening a file in memory-mapped mode. The class MemoryMapped hides all the OS specific stuff in only two files: MemoryMapped.h and MemoryMapped.cpp.
They compile without any warning with GCC 4.7 and Visual C++ 2010. I haven't tried other compilers but they should be able to handle it, too, even when they are a bit older.
(read more ...)

CPUs store numbers in two different ways: little or big endian. The majority of CPUs are designed to access memory in Little Endian way which seems to have the bytes mixed the wrong way. The memory layout of the hexadecimal number 0x12345678 looks like this: Note: ARM chips often support little endian, too.

I don't have a big endian computer at home (my ARM chips are little endian by default) but some of my source code required testing that everything works as expected on big endian machines, too. That's when I learnt about QEMU, a great open-source processor emulator. It's available on Unix and Windows.

This posting explains how to setup QEMU and run Debian Wheezy on an emulated big endian PowerPC.
(read more ...)

I received many kind requests from companies willing to use code from create.stephan-brumme.com in commercial products.
I publish my code because I believe that sharing knowledge makes this world a better place. Therefore all code will be under a zlib-style license now.
This applies to all past and future postings.

I appreciate if you send me an email with a short description of your project / product.

If you don't know git grab one of tutorials on the web.

I added a git repository to these projects on create.stephan-brumme.com that already came with a big yellow download button, e.g.:

You have read-only access via http and any push will produce an error message.
Whenever I update my projects (bugfixes, enhancements, ...), you can get the latest version:
# update local repository git pull
Unfortunately, not all repositories start with "version 1" because I lost some of the early source revisions.

Note: A more sophisticated approach is to clone the repository from your local machine to your web server. However, if you are on a shared hoster then chances are good that git is disabled. Therefore I suggest you stick with FTP.

At The Speed Of Light

Four weeks ago I posted an article about the popular CRC32 hashing algorithm. CRC32 works best on large data blocks because short sequences might lead to an increased number of collisions.

The FNV hash created by Fowler, Noll and Vo (see their website) comes with zero memory overhead (no precomputed look-up tables), is an incremental (rolling) hash and has a good avalanche behavior. It needs at about 4.5 CPU cycles per hashed byte on my computer, that's a little bit more than 700 MByte/second. GCC and Visual C++ produce identical code.

The heart of the hash function can be expressed in a single line (FNV1a):
newHash = (oneByte ^ oldHash) * Prime;
Reversing the order of XOR and multiplication leads to the original FNV1 hash which is considered slightly inferior:
newHash = (oneByte * Prime) ^ oldHash;
The 32-bit FNV1a hash of an unsigned char looks as follows in C/C++:

PHP's GD image library can draw all kinds of circles and ellipses. But they look rather ugly because they lack proper antialiasing: 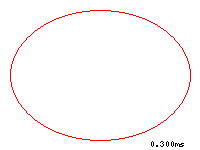 Aside from GD image handling stuff, it's a single line of code:
imageellipse($img, $width/2,$height/2, $width,$height, $color);
The image above was created by the following PHP file (click show):

browse through all postings:
newer stuff: